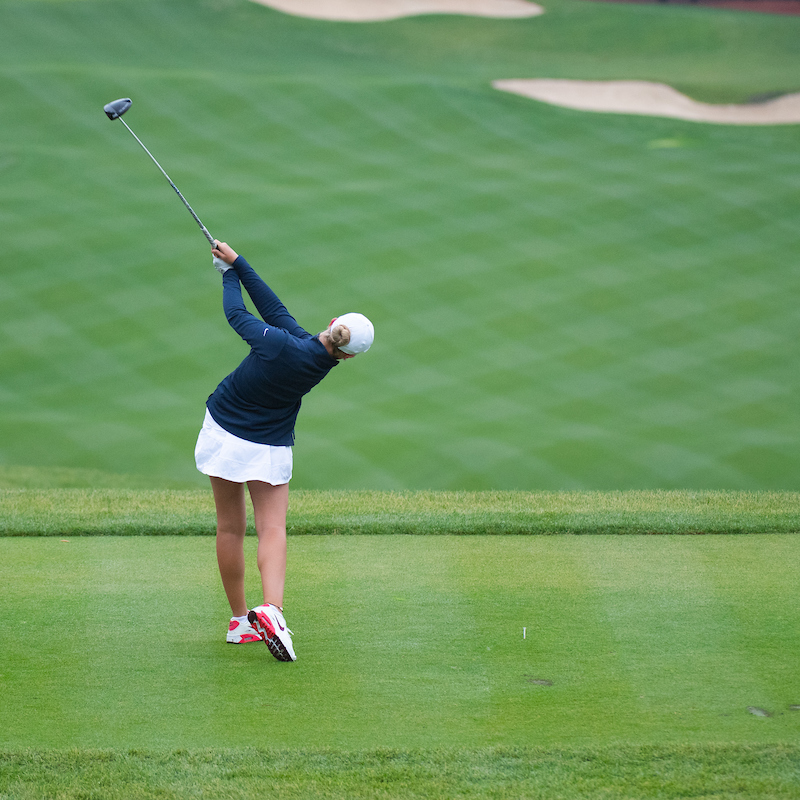 GRANITEVILLE, S.C. – The Junior Invitational began a new era Thursday morning as Bailey Shoemaker of Dade City, Fla., played her shot off the No. 1 tee at Sage Valley Golf Club. After 10 boys-only events, the first round of the 11th Junior Invitational featured 24 of the top junior girls in the world for the first time, along with 36 of the top boys.

“It was awesome. This is phenomenal,” Shoemaker said after completing her round. “This event has always been one of the guy’s favorites, and now after being here this week, it is one of our favorites, too.”

Shoemaker posted a bogey-free 68 and sits one shot behind leader Anna Davis (Spring Valley, Calif.). Davis and Shoemaker, who both played in the first group, took advantage of rain-softened greens with pinpoint approaches and steady putting. Davis posted a stretch of three birdies on 6, 7 and 9 to climb the leaderboard.

“With a few of the tees up today and the grounds being wet from the rain, it played different than the practice rounds,” Davis said. “There were good chances to make birdie out there.”

Kiarra Romero (San Jose, Calif.) and Megha Ganne (Holmdel, N.J.) each sit two shots back at -3. The youngest player in the field, 13-year-old Gianna Clemente (Estero, Fla.), is among four players at -2.

In the boys competition, four players are tied atop the leaderboard after rounds of 5-under 67. Harley Smith (England) and Caleb Surratt (Indian Trail, N.C.) played in the same group and were able to feed off each other’s success throughout the morning.

“It was nice to play with Caleb. He played well and pulled me along early in the round,” Smith said. “The course conditions were great given how wet it has been. We had some longer approaches and more difficult approaches once the greens firmed up, but it was a good start to the week.”

In the afternoon, strong closing stretches propelled Jack Roberts (Saint Marys, Ga.) and Nicholas Gross (Downingtown, Pa.) to the top of the leaderboard. Roberts rebounded from a double-bogey at No. 13 to finish with three birdies in the closing four holes. Gross circled his number on three of the final six holes.

Both leaderboards are full of red numbers as 11 boys and eight girls are tied or within three shots of the lead. With 36 holes to play, the prestigious golden jackets awarded to the Junior Invitational winners are still anyone’s for the taking.

The second round begins Friday morning at 8:30 am.

Recognized by Golfweek as the No. 1 junior event in golf, the Junior Invitational welcomes 60 of the very best junior golfers from around the world to Sage Valley Golf Club in Graniteville, South Carolina, each year. Founded in 2011, it has become one of the most desired invitations in the world of competitive junior golf. For more information, visit www.juniorinvitational.com.